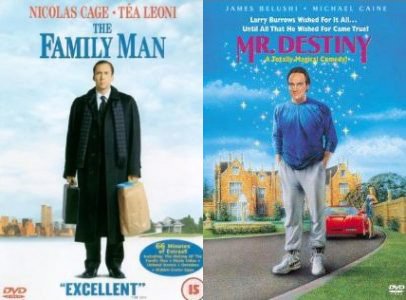 Top spiritual movies explained by David Hoffmeister: “All things work together for good. But the ego doesn’t think so, which is why we have movies like Family Man and Mr. Destiny, so we can get a glimpse of what is beyond everyday linear existence.

The main character in Family Man, Jack, is on top of the world, and he thinks he has it all: the ultimate New York lifestyle with a powerful job and everything that seems to go with it. To him, it’s the greatest lifestyle in the world. Then the angel comes along and says, ‘Remember, you asked for healing!’ The angel reminds him that he doesn’t know love, and therefore doesn’t know the meaning of life.

He gives Jack a glimpse of a life scenario filled with love and joy. Although it’s a completely different lifestyle—one with a wife and two children in a small village—Jack begins to open his heart to the love that the contrast experience is bringing him.

The movie Mr. Destiny is the flip side of that, where the main character, Larry, is bored with his life. He plays out the hypothetical idea: “What if? Maybe things would be better if they were different?” He thinks that his life would have been better if he had hit the home run fifteen years earlier, during the high school state championship game. He continually goes back to that one moment of striking out.

The Holy Spirit character, a bartender, shows Larry a glimpse of his life as if he had hit the home run that day. This hypothetical life scenario, however, spins out in one disaster after the next. The movie is quite amusing, but it has a profound theme: the idea of the addictive thinking that life could have been a little bit better if things were a little bit different in the past.

All hypothetical thinking implies the idea that the script could have been different. That is the trick: to think that human beings have choice. God didn’t give us the ability to choose. Our free will is in Heaven. Free will comes from relinquishing ego choices, from learning how to decide with the Holy Spirit, and eventually from accepting the Atonement, which is beyond choice. Free will doesn’t have anything to do with choice itself. It’s a reverberation of, ‘You don’t really have it.’

The Holy Spirit character in this movie shows Larry that everything he decides, projects out the world he sees. When Larry makes different choices, he gets to see a different scenario. He starts to understand that his hypothetical scenario is not as great as he thought it would be. It becomes a nightmare for him.

The very things that seem to be valuable and attainable in this world are literally blocks to the awareness of love. Everything is backwards and upside down in this world—that is why you can’t judge your advances from your retreats. Larry’s glimpse of his hypothetical life would seem to be like a dream for many people: president at the company, a big house, fancy cars, etc. He seems to have an abundance of what the world pursues, but it is disastrous because he loses his awareness of love.”

To learn more about David Hoffmeister and the Living Miracles Community visit livingmiracles.org
Subscribe to the online Movie Watcher’s Guide to Enlightenment (MWGE) for an abundance of reviews on the top spiritual movies!

Subscribe to MWGE.org at the Master Pops level to access the complete commentary for this and other great quantum forgiveness movies!
SIGN-UP
JOIN NOW
PrevPreviousWhich Movie to Watch for a Spiritual Awakening Experience?
NextDuality and Forgiveness – By David Hoffmeister on the Movie Watcher’s Guide to EnlightenmentNext