The Dreamer of the Dream: The Movie “Being There” – by David Hoffmeister 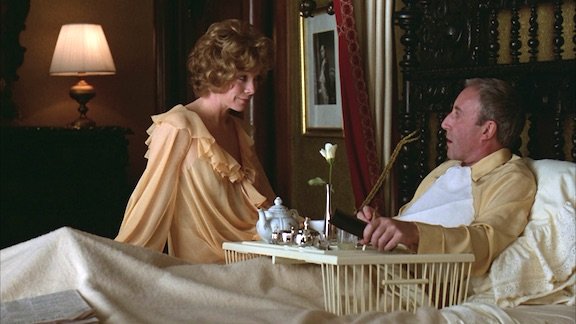 Switch from being a dream figure to being the Dreamer of the Dream: David Hoffmeister ACIM explains how by using the movie “Being There.” This is deep!

Movie Watcher’s Guide to Enlightenment – David Hoffmeister: If one can work a perceived upset down to the core decision, the belief in separation from God, and clearly discern the ego’s purpose unconcealed, one can laugh at the idea of ego. That is how peace of mind is reached. One sees what one is not, and what one is, gently returns to awareness. There is a scene that comes to mind from the movie Being There. The movie has some great symbols of innocence and defenselessness.

When Chauncey, the gardener, leaves his sheltered place of residence and goes out into the world, he encounters the inner city. He’s walking along and a street gang comes up to him, calling him names. One gang member pulls out a knife and holds it right up to his face. Although this situation could be perceived as threatening, Chauncey remains calm and defenseless.

He simply pulls out a TV remote control he carries in his pocket, aims and clicks, as if thinking, “I don’t like this channel, perhaps there is an alternative.” The Spirit’s purpose of forgiveness is the real alternative to choose, regardless of the situation. The Spirit is the choice, or the channel, to tune into for clear perception and peace of mind.

Friend: So while we are here, there’s only one choice and that’s between forgiveness and separation.

David: And that’s only while one believes one is here. If one sees that one is the dreamer of the dream of separation, one is not denying the dreaming, but merely switching from being a dream figure to being the dreamer. For example, to think: “I’m a man, I live at such and such an address, and I do such and such for a living,” indicates that the mind believes it’s on the screen, in the dream. That’s personhood. That’s not being right-minded.

Identified as a person, one will inevitably feel defensive about other persons, places, situations, events, or institutions such as the government, neighbors, co-workers, etc., for personhood is not true. But if one sees oneself as the dreamer of the dream, one can accept a different purpose for the dream. It’s quite a detached place to just see the false as false. One watches and observes the thoughts of the world.

One no longer reacts to them. In worldly perception it still seems like the body speaks. It still seems like the body is active, at times walking or talking. But one’s attention is so far removed from the thoughts of the world that one feels disidentified from form and identified with the Spirit’s purpose of forgiveness. In the flow of this purpose there is no awareness of separate persons, actions, situations, or events.

Excerpt from Awakening through A Course in Miracles by David Hoffmeister.

Visit livingmiracles.org to learn more about David Hoffmeister and the Living Miracles Community.

Subscribe to MWGE.org at the Master Pops level to access the complete commentary for this and other great quantum forgiveness movies!
SIGN-UP
JOIN NOW
PrevPreviousCountdown to the Top 10 Best Spiritual Movies by David Hoffmeister with MWGE! Numbers 2 and 1
NextWhich Movie to Watch for a Spiritual Awakening Experience?Next
© 2022 ALL RIGHTS RESERVED​​